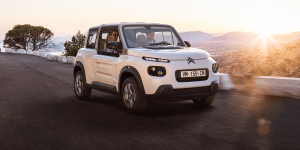 The French carmaker reveales the new E-Mehari, which is based on the limited edition model ‘Styled by Courrèges’ presented at the IAA last year. Apart from an electric powertrain, the four-seat cabrio gets thus a strict hard top as well as windows at the sides and the back.

Interestingly, the model is the first electric vehicle to get an “Origine France Guaranteed “ certification, as both the vehicle and the battery are produced in France – the first in Rennes, the latter close to Quimper in Brittany.

Originally, the Méhari was an off-road vehicle manufactured between 1968 to 1988. Its name refers to a certain kind of camel.
greencarcongress.com, carscoops.com, int-media.citroen.com