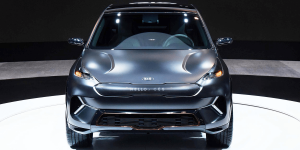 Kia’s has put a prototype of its all-electric Niro on display in Las Vegas. The model’s 150 kW serial version shall hit the stores before the year’s end. According to the carmaker, it comes with a 64 kWh battery pack and reaches up to 382 km.

Kia’s Niro series includes also a hybrid as well as a plug-in hybrid variant. Like Hyundai with the Ioniq, Kia chose to electrify the Niro successively. However, the Niro EV will be but one of a total of 16 electric models the Hyundai-Kia groups wants to offer until 2025. That are two more than originally stated. Among them five new hybrid and PHEV vehicles, five BEVs and a fuel cell vehicle targeting mass market by 2020.

Except of the above mentioned figures, Kia has not yet reveiled any other tech specs. What is known however, is that the compact SUV features a interactive display with modern light technology that replaces the radiator grille. A so-called Active Pedestrian Warning System (APWS) at the front notices pedestrians and cyclists thanks to a camera and warns them in case of emergency via speakers.