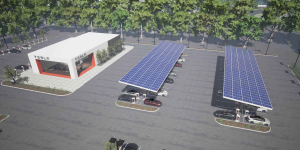 Tesla CEO Elon Musk wants to increase the attraction of a Supercharger site in LA by turning it into a drive-thru restaurant where waiters wheel around in roller skates, not to forget loud rock music.

The theme obviously comes from the movies although neither Uma Thurman nor John Travolta have confirmed whether they’d come to the opening.

And while Elon Musk’s idea appears way less substantial than even his Boring Company was, Twitter is all over it. The virtual wires are running high with users wanting to know details. If Musk wanted to test if there is a market, he can now be sure.

His extended suggestions include a menu for Tesla drivers to access through their in-car system, so it would just pop up on the display – have a burger while you wait. That said, the carbon footprint of processed meat à la the big yellow M would likely lead to discussions among Tesla fans.

The effort is more than a PR exercise though. Tesla has already begun to add extras to its otherwise minimal, as in stark naked, charging sites. With thousands of Model 3 to appear on the road over the coming years, cues will be guaranteed, fast charging or not. Adding fancy (fast) food to the bill then just becomes another clever move.

Tesla Model 3s to rent for rather outrageous prices