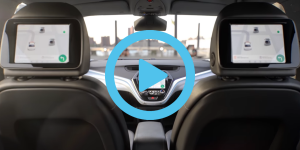 According to “Forbes”, this feature makes it “the first true robo-taxi to hit the streets”. Serial production of the model shall start already in 2019. Even though rival Waymo intends to launch a self-driving ride-hailing service already before the year’s end, its models still have a steering wheel and pedals – just in case.

However, another hurdle is still to take: The National Highway Traffic Safety Administration (NHTSA) has to decide whether it grants permission to GM to commercially deploy up to 2,500 Cruise AVs in ride-hailing fleets in 2019. Given the green light, GM could launch its service in seven U.S. states that are currently permitting those kind of testing. First ride-hailing site is likely to be San Francisco.
forbes.com, theverge.com

JAC and VW about to launch first NEVs for China