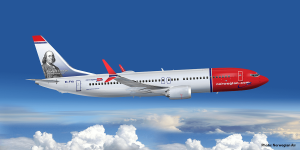 Soon, the company wants to publish a first call for tender to test a small 19-seat electric aircraft on a commercial flight route. Kick-off is planned for 2025.

Statistics show that the aviation sector accounts for 2.4 percent of Norway’s greenhouse gas emissions emitted by the domestic transport industry. Given that the country reaches its aim, “air travel will no longer be a problem for the climate, it will be a solution”, states Avinor chief executive Dag Falk-Petersen.

British airline EasyJet is following a similar trail. Within ten years, the company wants to offer electric-powered short-haul flights, reportedly. The airline partners with Wright Electric, a start-up that showed a concept of an electric-powered short-distance airplane for 150 passengers and a range of up to 300 miles in March 2017.
theguardian.com