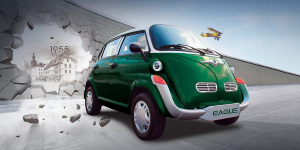 As fuel economy is the word of the day, China’s LSVE looked to Europe for inspiration and reinvented the Bubble car. Formerly built by BMW as Isetta, the Chinese version of the tiny legend runs on electricity and that isn’t the only difference.

What had made the Isetta so iconic back in 1955 was not only its round and rather cute body but its single front door. Unlike the original, the new car called Eagle EG6330K features four doors though and has room for four passengers.

And it was not just the design of the micro car alone that made it the he best-selling single-cylinder car in the world back then. BMW had made it the most fuel-efficient model, a 3-litre car.

It is that spirit LSVE wants to tap into today and their Eagle flies, or glides rather, at a top speed of 60 kph for 120 kilometres at the most. An electric motor (5.3 hp) is mated with a 72 kWh lead-acid battery, which takes away much of the otherwise eco appeal.

Still, LSVE wants to go ahead with production and while a price has yet to be set, it will likely hover around 4,000 euros.