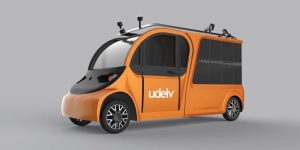 Another startup from California wants to make it big on the last mile for deliveries. Udelv is currently testing its autonomous electric van that can be booked and opened via app for drop-offs by or at multiple customers.

The vehicle is fully electric and features 18 cargo compartments with automatic doors. They open using a cloud-based technology that is shared between the vehicle, customers and merchants. In its current configuration, the vehicle can drive for up to 97 kilometres and can load up to 317.5 kilos of cargo.

udelv also created a teleoperations system to monitor and control the EV remotely. The company is planning to test dozens of udelv vehicles on the roads in a few states within a short timeframe and to use a subscription business model to roll out its vehicle fleet.

Udelv is not alone in its endeavour for autonomous deliveries. Nuro, itself founded by Google engineers, is testing their autonomous EV that also is to deliver goods without a driver.

Paul and BPW to electrify Mercedes Vario as standard