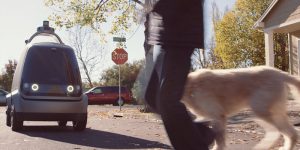 Founded by former Google engineers, Nuro is out to make goods delivery autonomous and electric. Their mini delivery van is modular on the inside and convinced investors to spent 92m dollars on the Silicon Valley-based start-up.

Nuro’s little bubble van as you may call it with reference to the legendary Isetta is entirely autonomous and electric. The ex-Google engineers behind the concept have designed it as delivery vehicle for the last mile. Hence, the speed is low.

Both the set-up and more distinctly the design show the inventors’ roots in Google’s self-driving car project. The Fireflies have since retired reportedly but their tecchy soul appears to be alive. Still Nuro funders Dave Ferguson and Jiajun Zhu claim they have built the software from scratch.

They do have the expertise. Zhu was Google’s self-driving team’s principal software engineer for eight years. Ferguson came to Google in 2011 from Carnegie Mellon’s Robotics Institute. He served as the main computer-vision and machine-learning engineer at Google before leaving with Zhu in late 2016 to start Nuro.

For now, Nuro’s R1 is a prototype with a working title. Still, the roof’s sensor array for autonomous driving is real and includes LIDAR, cameras, and radars. Conventional controls such as a steering wheel or a driver’s seat are missing entirely. Nuro gears for full autonomy or remote control in the meantime.

The latter is currently tested in six self-driving cars that collect data and optimise routes in California, which then gets fed into its prototype vehicles. Nuro has got permission from the California DMV to start testing on public roads before the year’s end.

So far, investors have backed the company with 92 million dollars without a proven business case. However, environmentally-friendly goods delivery is a hot topic not only for cities and small businesses but more so for giant retailers like Amazon. The internet corporation is already looking into delivery drones so that a step into autonomous delivery vans does not seem far off.