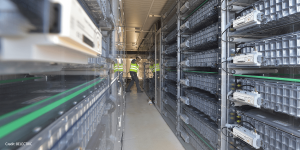 The installed battery modules are of the same type as those commonly used in hybrid vehicles, providing hope for a more uniform and reusable system, and will maintain a rated capacity of about 7MWh, which correspond to the nominal capacity of about 700,000 smartphones. The total investment in the park, which was entirely constructed and designed by Belectric, under contract for RWE, was about 6 million euros, and represents a major milestone in the shift to a different energy model for the major German energy producer RWE.

The storage facility consists of three 40-foot containers, which house somewhere around 180 batteries each. The facility is designed to provide grid services, including actions such as power control. They will also help regulate incoming electric power, while effectively stabilising the grid to provide a reliable electricity supply for the region.