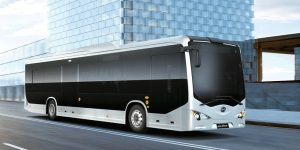 BYD’s arm in the U.S. has announced two new partnerships to introduce 29 electric buses along the California coast. The University of California, San Francisco, has purchased 15 of the K7 buses by itself, while Santa Barbara Metropolitan Transit District will be employing 13 of the buses.

The order for BYD comes amid mounting resistance of new fossil fuel favouring rules. California wants to continue to stay on a zero emission course. China’s BYD, that is backed by Warren Buffet, produces the electric buses locally in the USA and had been early on the market.

The rollout of the 9-metre models is expected to precede a larger expansion, as providers are beginning to take note of potential savings and reduced maintenance costs, next to reducing their environmental footprint, which is expected to delight all kinds of interest groups.

The electric buses have a range of more than 140 miles and a capacity of up to 42 passengers, depending on how the bus is configured, and costs approximately a whole dollar less per mile to operate than a conventional diesel-powered bus.