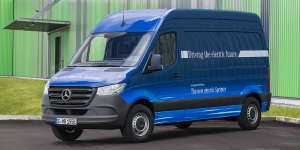 Mercedes‑Benz Vans has taken the wraps off its next generation Sprinter that is due to hit the shelves this June in Europe. Pictures show the electric version of the transporter from all sides but little has been said about technology.

Daimler has discovered the utility market ripe for electrification (finally) and the Sprinter standard van is next in line to be electric after the eVito is to launch this summer followed by the presentation of Daimlers next electric truck Actros.

The electric Sprinter is due no sooner than 2019 and Daimler says it would come with the option or advice on how to install charging infrastructure on the clients’ premises. As the vans aim at urban transport, expect the range to be in the medium segment at the most.

Details remain scarce on the rest of the technology but inside there will be more infotainment and connected offers for fleet managers to monitor. The Sprinter comes in 1,700 variants, depending on body type, drive system, cab design, body length, payload, cargo-space height and equipment versions.

For the price, Mercedes says in a statement that in terms of operating costs, the electric vans are on par with comparable models powered by a diesel engine.

Most Sprinter for Europe will be made in Germany. Mercedes is investing a total of 450 million euros in the lead plant of worldwide Sprinter production in Düsseldorf and in the factory in Ludwigsfelde, not far from Berlin.
Mercedes-Benz Vans is also investing 150 million US dollars for the new Sprinter in Argentina. In addition, a new production facility for the Sprinter in the United States is planned as an expansion of the existing assembly plant. The new facility in North Charleston, South Carolina will cost about 500m dollars, with completion and start of production scheduled for the second half of 2018. Worldwide start of production of the new Sprinter will be in Germany in early March.