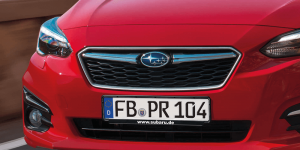 Subarus first plug-in hybrid, which is scheduled to be released in the USA in 2018, is set to utilize technology from a partnership with Toyota. According to Subarus U.S. Chief, Takeshi Tachimori, the majority of the tech inside the new PHEV comes from the Prius.

Regardless of the origin of some of the technology under the hood, the PHEV will be marketed by Subaru, of course. Also the model will feature a Subaru motor, rather than a Toyoto motor, which would have to be horizontally installed, similarly to the engine design of the Prius.

Beyond that, Tachimori did not reveal which model the car design will be based on, however we were able to learn that the car will be produced in Japan, from where it will be exported to its destination in the USA. Additionally, so far it will only be available in states that have taken on California’s new emissions laws.

In European news, Subaru plans to stop selling diesel motors as of 2020, instead focusing on the sale of electric motors reportedly. Furthermore, they have promised to not only have one fully-electric model available by 2021, but a whole range of electric versions of existing vehicles, such as the Outback, the Forester and the Impreza.

Development on the announced BEV for 2021 has already begun, and Subaru hopes to benefit from EV Common Architecture Spirit, the Japanese joint venture by Toyota, Mazda, Suzuku, Subaru, Hino and Daihatsu. Currently Subaru has designated 5 of its engineers to work in the cooperation.

The company is too small to develop its own electric vehicle, as the Subaru R&D budget stands at about 1/10th of that of Toyota. Tachimori confirmed that Subaru is not in a position to trail blaze new development on its own, but is working hard within the framework of the partnership, which will cost them 17% of their company, which will go to Toyota.

Currently Subaru has no fully electric cars in their fleet, however they did once: Subaru had previously developed and sold the Stella mini-car, but had to end production in 2011 due to lack of commercial success and public interest.