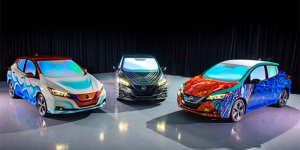 Inspired by the Disney film “A Wrinkle in Time”, Nissan is showing off their special effects with three limited edition Leafs. The three EVs take their technological clues from the upcoming film and have incorporated wild, futuristic design choices; The Leafs not only wear crazy colours but their windows are touch sensitive screens displaying even more colour in an interactive LED light show.

Whether the cars are actually drive-able was not mentioned in the article, however the vehicles have been fitted with heat-sensitive cameras, which will enable the vehicles to track and react to people around them. “Breakthrough technology is a key part of the storyline in “A Wrinkle in Time’ and also a cornerstone of the all-new Nissan LEAF,” said Jeremy Tucker, vice president, marketing communications and media, Nissan North America, Inc.

The three entirely custom vehicles will not be available for sale, however the light show does make for effective advertising for both the film and the new generation of Leaf vehicles.

The future is a long shot for electric cars

This robot is a cherry picker