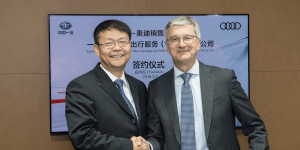 Audi and its Chinese joint venture partner FAW have announced the founding of two new entities which will focus on mobility and digital services from the end of this year. They plan to launch 4 all-electric models made in China within the next 5 years.

With the new, indepedent FAW-Audi distribution company, the partners are ramping up their production capacities and will streamline decision-making processes. In the next five years they are planning the release of four new electric vehicles to be produced in China.

The new companies will completely belong to the joint venture and will integrate the existing Audi sales division currently integrated in FAW-Volkswagen.