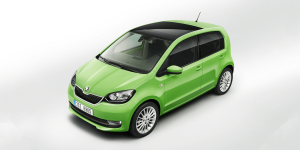 The first electric model by Skoda will be an electric version of its compact Citigo with a range of 300km and will be market ready latest by the end of 2019. This was announced at the Geneva Motor Show.

Rumours concerning the EV have been circulating for almost a year, which have now finally been confirmed. The electric Citigo will be based on the VW e-up, but will have a significantly higher range than the VW model, at 300 km. Alain Favey, the head of distribution and marketing at Skoda, announced both the range and the official name for the Citigo E.

It is also likely, that the VW e-up will receive an upgrade to its battery this year. It has been available since 2013, however the NEFZ range of up to 160 km has remained the same since launch.

On the same platform basis, the Seat e-Mii is also expected for 2019. An electric version was announced by Seat at last year’s Mobile World Congress, however it has only found use with a few models in a Barcelona-based ride-share programme.