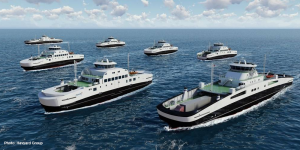 Five of them are going to be manufactured in Leirvik, Norway and two in Cemre, Turkey. While the first five will be capable of carrying 50 cars each, the latter two are designed to transport 80 cars each. The total contract value accumulates to roughly 800m Norwegian Krone (82m euros). The whole fleet shall be deployed in Hordaland and Møre og Romsdal.

Fjord 1 is one of Norway’s biggest regional transport companies and operates plenty ferries to connect the country’s fjords with the mainland. In 2016, its ferries are said to have carried 10.2m vehicles and 20.9 passengers.

As waterways in the fjord areas are usually short, the electrification of ferries gets a topic that is more and more leveraged in Norway. But that is not all: A national research project is currently developing zero-emission and self-driving ferries with companies such as Kongsberg, Grenland Energy, Fjellstrand and Grønn Kontakt working on the implementation of this project.
electrek.co, marinelink.com, infomarine.net