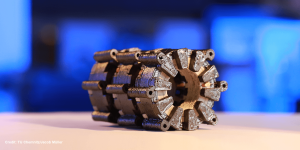 The team at the Chemnitz University of Technology have produced what they say is the the “world’s first electric motor using a multi-material 3D printing process.” This was done with the aid of metallic and ceramic pastes, which are formed in layers by an extrusion process and then sintered.

The researchers managed to 3D-print all relevant components of such an electric machine in one process. These include electrical conductors made of copper as well as the electrical insulation made of ceramic, which insulates the conductors against each other and against the magnetic circuit parts made of iron.

In addition to the higher temperature resistance, the ceramic insulation material also has a higher thermal conductivity, thus increasing the power density of electrical machines. The basis of the process is the extrusion of high-viscosity pastes layer by layer. These contain particles of the desired materials such as iron, copper or ceramics and specially tailored binders. In order to achieve the precision required for multi-material printing, the scientists work together with dosing technology company ViscoTec Pumpen- u. Dosiertechnik GmbH.

The next step is to bring their technology to market maturity. The establishment of a spin-off from TU Chemitz is currently in preparation. First, the team will present their findings at the Hannover Messe this April at the joint “Research for the Future” stand in Hall 2, Stand A38.