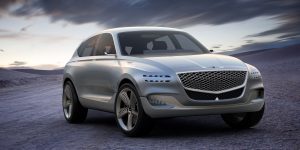 Hyundai is advancing its luxury label Genesis to an increasingly electric brand. Visitors of the New York Motor Show that starts this week, will see a concept electric car that builds on a dedicated platform which is to inform all other Genesis models.

Hyundai plans to launch the first Genesis EV in 2021, then with a range of 500 kilometres. In New York, a concept is to go on display to showcase a new platform specifically made to support electric cars only.

The Koreans had announced their will to electrify the premium label almost exactly a year ago, saying they would launch a first Genesis plug-in hybrid model by 2019 and to have an all-electric version only two years later.

The Genesis EV is inspired by a GT, or Gran Turismo design. Hyundai did not provide much detail to date but said the architecture can hold various battery sizes. For the model at hand, they aim for a range of 500 kilometres. They also said that the design is to inspire all other Genesis models. There will be at least three electric Genesis and potentially two PHEV by 2025 as part of the group’s larger strategy to electrify.