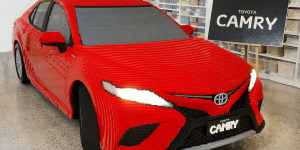 Toyota has set its engineers a recreational task when it asked them to build a Camry made entirely from Lego bricks. Not as a model but to full scale, including little details such as the hybrid lettering. Play on.

It took the grown-ups more than half a million Lego bricks to get the Camry together for the occasion of the 2018 model launch in Australia.

The layout had been designed by Ryan McNaught aka ‘The Brickman’ a certified Lego professional, one of 14 worldwide. We don’t know how you get to play with Lego for life as a job but you sure need to have a lot of patience.

It took over 900 hours to make the Toyota Camry out of Lego, 40 times longer than it takes the factory workers to make a real one. Maybe next time the robots by Lego Technik could help. Do they have a Tesla Fremont set yet?