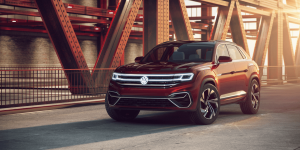 Volkswagen has unveiled the Atlas Cross Sport Concept with 5 seats and a plug-in hybrid drive at the New York Auto Show. The close to production version on show builds on the existing Atlas SUV and launch is set for next year.

For now, the concept comes with a 261 kW (355 hp) plug-in hybrid drive which couples an internal combustion engine with two electric motors and a battery holding 18 kWh. Range is given at 42 kilometres (26 miles). The top speed is 209 kph (130 mph).

Volkswagen also holds a conventional mild hybrid drive as an option which would combine the same motor set up with a 2 kWh battery.

Production is scheduled in the US market starting in 2019, and the Atlas will be built alongside the original seven-seat Atlas and the Passat in Chattanooga, Tennessee.