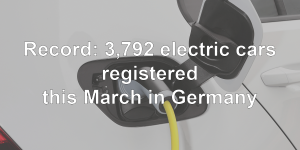 Hybrid cars registered similar growth with 10,784 having found new homes in March, up 45.4% compared to the same month last year. Among those are 3,018 plug-in hybrids, an increase of 31.9%.

Overall, sales of PEV in Germany stand at 57,549 units according to the German Federal Office for Economic Affairs and Export Control (BAFA) responsible to register the plug-in grant called Umweltbonus in German. 33,318 people asked for support to buy an all-electric car with another 24,214 opting for a PHEV. Fuel cell vehicles do not play a role in the minds of German buyers as to date only 17 were sold.

First electric SUV by WM Motor rolls off the line