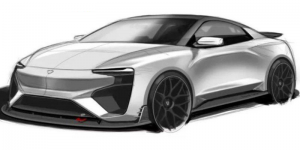 Aiways is another new EV startup from China ready to set up shop. The company also has a branch in Germany however, initiated by Roland Gumpert, who is their head of product and doubles as lead for their operations in Germany.

The company is planning a varied lineup for electric vehicles of different body sizes and styles, and has already begun manufacturing in the Chinese Shangrao factory, where an ambitious annual capacity of 150,000 vehicles, is set to be doubled before long.

The first project will be presented at the Beijing Auto Show, and will be called the Aiways RG. The RG is a sportscar that reportedly has a 1,200 km range and a top speed of 300 kph.

RG in the vehicles name stands for Roland Gumpert. The engineer started a company in 2004 called GMG Sportwagenmanufaktur Altenburg, which went under in 2013. 2016 it was bought up by a consortium based in Hong Kong, and took a new life under the name Apollo Automobil. Gumpert left the company in the same year, and has since found a new sponsor and home with Aiways.

The production of the Aiways RG will begin in Germany before being moved to China. Further details are to follow at the end of the month from Beijing.