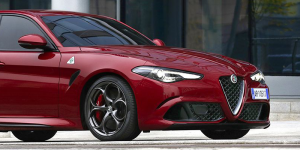 Alfa Romeo is developing a coupé version of its Giulia car with a hybrid motor, which is set to be released next year. The company plans two different motors, which will feature tech similar to the KERS used in Formula 1 racing.

KERS stands for the Kinetic Energy Recovery System, which is used to recover “spent” energy while driving, and is primarily used in Formula 1 racing. The report states that the technology will be used to electrify the coupé version of the car, comparable to the LaFerrari using the HY-KERS-System. The vehicle may already be market ready by 2019, at least that is the currently planned date. However the report also sources the information from unnamed persons, so we are still waiting for the official statement.

Two motors are being planned, which indicates that the KERS-comparable system will be applied to the 2.0 liter combustion motor Giulia Veloce and the coupling from the 2.9 liter V6 from the Giulia Quadrifoglio. The first version could have a performance around 253 kW, and the second version possibly even up to 465 kW.