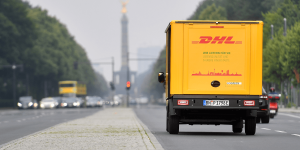 The German Post has been considering strategic options to expand the business surrounding their StreetScooter vans. An external investor is being considered, as well as opening the venture for public investment.

The report considers several unnamed sources, who have indicated that the company is looking to increase the value of the StreetScooter venture to more than 1 billion euros, after it generated 200 million euros in 2016. When the company was prompted, the Deutsche Post decided not to comment.

The Post announced the founding of a new business unit, which will push the StreetScooter marketing, among other things. Heading the new unit is Jürgen Gerdes, who was also responsible for the StreetScooter so far. In a 2017 interview with electrive.net, he said that “Electric mobility just makes our business better.”

The StreetScooter is currently in use nationwide with about 5,500 units delivering letters and packages, according to a new statistic. The vehicles are run with electricity taken from renewable sources. By 2050, the company is planning to convert all logistics vehicles to be completely free from emissions.