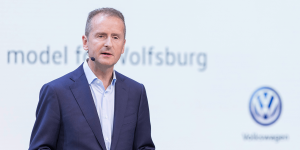 It’s confirmed, ex-BMW manager Dr Herbert Diess is taking over from Matthias Müller, and this sets things in motion. New brand groups are being introduced and the UV unit will be open for public investment. Interestingly, Diess will also head R&D. Editor-in-Chief, Peter Schwierz comments.

The new structure indicates that Diess will make electrification and digitization his cause, although he will also have his hands full with the added responsibility of being in charge of Seat and Škoda as well as Volkswagen.

Diess was known as a supporter of electric mobility even back in his BMW days, and it is expected that he will continue to push for more development at VW, which means good things for the e-mobility sector. VW already announced plans to begin producing EVs on a global scale at 16 locations by 2022. Diess has emphasized that in this phase of change, it is important for VW to build up and maintain tempo, particularly in the areas of e-mobility and digitization.

Another development is the promotion of the Porsche boss Oliver Blume to the group management board, as he will now be responsible for managing production in 12 factories. Blume has also been an outspoken supporter and we expect that he will bring the same drive for electrification to the additional brands under his management, that he did for Porsche.

Additionally it was mentioned that the former workers council spokesperson Gunnar Kilian will now take over the personnel board. He is tasked with preparing the VW employees for the future. The rumors surrounding Audi boss Rupert Stadler were premature, and he will be running sales for the company. The sales area has been difficult for Porsche, partially because of competence issues, as well as unwillingness to push electrified vehicles into the forefront of the shop. This will likely change with the new e-mobility direction.

All in all, the corporation has many both small and large wheels turning between Wolfsburg, Zuffenhausen, Ingolstadt and Munich. Volkswagen Truck & Bus also recently announced a cooperation with the Toyota subsidiary Hino Motors, where both companies also plan to focus on research and development of EV technology. In Braunschweig VW is investing heavily in battery development. The factory there will take charge of MEB platform battery development, which is central to the VW electrification strategy. It seem that VW is well on the road to modernizing their company and escaping the dieselgate scandal, so Tesla in the US and Toyota in Japan will have some serious competition!