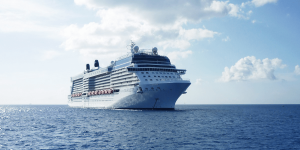 This is the first ever deal to curb emissions from the shipping industry as 173 countries agree at a London meeting of the U.N. International Maritime Organization (IMO) to reduce emissions by at least 50 percent by 2050 from 2008 levels.

More concrete measures can be expected by 2023 with only Russia, Saudi Arabia and the USA opposing the proposal to decarbonise maritime transport. The remaining 173 countries recognise the shipping industry as the sixth-largest greenhouse gas emitter if it were a country, according to data from the World Bank.

It also brings the industry in line with the Paris Climate agreement, COP21. The shipping industry had been left out, as the accord saw each country present an individual plan to reduce their own emissions, leaving the oceans at bay.

While opposition for the new LMO deal came mainly from oil producing countries, other organisations fear the agreement has not gone far enough. Especially the lack of any clear plan of action to deliver the emissions reductions, including short-term measures, is a concern, according to the group of NGOs with observer status at the UN’s IMO.

The Clean Shipping Coalition (CSC) thus asks states to use the words “at least” when referring to the emission target to keep the pressure on for full decarbonisation by 2050.