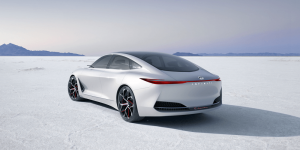 Infiniti is planning to increase their sales in China in the next five years to about 150,000 vehicles per year, which is triple their current rate. Electrification plays a central role in this endeavor for Nissans premium brand.

In China’s growing e-mobility market Infiniti sees a chance to score big in the premium vehicle area, which has mostly been dominated by Audi, BMW and Mercedes for the past two decades.

Last year, the company produced two vehicle models in China and sold 48,000 vehicles. In the next five years, Infiniti is planning to add another four cars to their lineup and to triple their sales, according to Infiniti CEO Roland Krüger.

The company had also previously announced their plan to electrify all vehicle models as of 2021, either with a purely electric transmission, or the e-Power Technology made by Nissan, which allows a small combustion engine to help charge batteries, it becomes clear that the strategy in China will be centrally built around electrified vehicles.

Another goal which Infiniti is aiming for, is to change their sales model so that half of their global income comes from electrified vehicles by 2025. The first purely electric model by the brand is expected in 2021. At the NAIAS in Detroit, Infiniti presented the Q Inspiration Concept to give a first glimpse of what we can expect with the new electric direction of the company. The concept will also be shown in the Beijing Motor Show in the coming week.