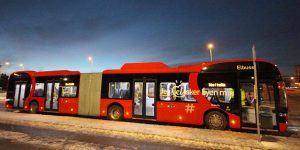 Oslo has announced the procurement of 70 new electric buses, which will take up service next year. The companies Unibus, Nobina and Norgesbuss will be operating the new vehicles on 13 bus lines in Oslo.

Together with the six buses that were procured for the pilot project that preceded the decision, Oslo will be running a total of 76 electric buses by 2019, 52 of which are articulated buses. The public transport company Ruter is also involved in the project, but which other manufacturers are involved has so far been kept quiet.

The procurement is to be a highlight for Oslo as the European environmental capital, accoding to Lan Marie Berg from the Norwegian Agency for Ecology and Traffic. It is also the largest electric bus fleet currently active among the European capitals, according to Clean Technica.

The project will cost somewhere around 88 million euros over the next ten years. Previously, the companies Unibuss, Nobina and Norgesbuss, as well as the public transport operator Ruter had agreed to replace diesel buses with a united effort for electric buses.

Unibuss alone will operate 40 new electric buses in spring of 2019, and has provided the lions share of buses in Oslo, with 60%. More electrified bus lines will also be added later. For now, the most popular bus line in Norway, the 31, will receive 20 new articulated buses.