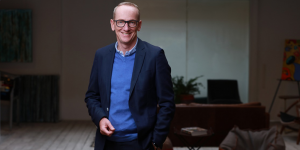 Karl Thomas Neumann, the former Opel/Vauxhall CEO has found a new job at Evelozcity. He joins former BMW and short-term Faraday Future managers in their endeavour to go it alone in California and launch three EV by 2021.

At Evelozcity, Neumann is to take charge of company’s connectivity and mobility offers as well as oversee all marketing, including branding, customer experience and on top the European market.

In his new role, the former Opel man forms part of the executive team and board of directors. The latter is a rather illustrious circle of industry professionals. Evelozcity founder Stefan Krause for example looks back at two decades at BMW, and a recent and very brief spell as CTO of Faraday Future. On board as well is Ulrich Kranz, who helped design BMW’s electric models, the i3 and i8.

KT Neumann is himself a veteran and one who has been pushing electric mobility early on albeit with little effect. Neumann used to be the CEO of Volkswagen Group China and CEO of Continental AG, and in 2009 took over companywide responsibility for electric propulsion at VW. Prior to his departure from Opel, he had tried to convince new owner PSA to turn the brand into an exclusively electric one but had to give up.

Says Neumann: “I have looked at many options and believe that the traditional carmakers will not be driving the change. Evelozcity reflects my beliefs of what is required and that’s why I joined.”

In a press release, Evelozcity says it is “breaking free from traditional hierarchy and taking a modern approach to management for faster and more precise decision making” meaning the four leaders won’t use conventional job titles. That sounds as if the Germans have undergone a thorough “Californication”.

Apart from flat hierarchies, Evelozcity is working on what it calls a “skateboard architecture” to house the battery, electric drivetrain and cabins. Three electric vehicles, a personal car, another for ride hailing and a last-mile delivery EV are planned with none costing more than 50,000 dollars.