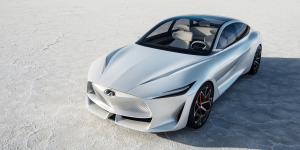 Nissan’s luxury brand Infiniti has stated that they wish to develop a completely new electrified vehicle platform, which will be based on the Q Inspiration concept presented earlier this year. The first vehicle based on the new architecture will be an electric sedan.

The new vehicle will go into serial production as one of five vehicles on the Chinese market within five years. “We very much had China in mind when designing the Q Inspiration, which shows a very sporty, performance-oriented electric concept, with a much bigger interior space,” said Infiniti president Roland Krueger.

The company first presented the concept at the NAIAS in Detroit, and will also show it off at the upcoming Beijing Motor Show. Infiniti is speaking of a “new design language” when referring to their Q Inspiration concept, which could leave its mark on generations to come.

Infiniti also announced their intention to electrify all vehicle models by 2021 some time ago. They are also considering using the e-Power technology from Nissan to electrify vehicles to reach this target. Attached to this production goal, is also a sales target, which aims to make half of their global profit with alternative energy vehicles by 2025. The first electric car by the brand is planned for 2021.

Specifically the Chinese market is of interest to Infiniti and Nissan, and they have launched measures to capitalize on the newly opened market. Currently they also have a joint venture with Dongfeng, which sold 48,408 vehicles last year, marking a 16% increase from the year before. In the next five years, Infiniti is planning to triple their sales to reach somewhere around 150,000 vehicles sold per year. Electrification plays a major role in this development.