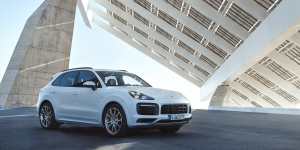 Porsche has released the latest Cayenne E-Hybrid, that can be ordered with immediate effect. Whilst the engine is only slightly stronger than in the predecessor, the Cayenne S E-Hybrid, Porsche has reengineered the entire hybrid system so now the electric drive delivers 43% more power.

Overall, the hybrid system in the Porsche Cayenne E-Hybrid has a power of 455 hp with the new electric drive boasting a 100 kW.

Clearly this plug-in hybrid requires a larger battery as well and the new power pack holds a capacity of 14.1 kWh, up from 10.8 kWh. The Cayenne E-Hybrid can drive all-electrically at a speed of up to 134 kph for up to 44 kilometres (NEDC).

The liquid-cooled battery consists of eight modules and the size of this battery pack is the same as the battery used in the previous Cayenne S E-Hybrid, but with improved energy density. For charging it uses a 230-volt, 32 amp connection and the optional 7.2 kW onboard charger, and Porsche says charging is quicker with the new Cayenne E-Hybrid than in prior models.

As Porsche reengineered the powertrain, the hybrid module, which is positioned between the engine and eight-speed transmission, consists of an electric motor and a separating clutch. In contrast to the previous electro-hydraulic system with a spindle actuator, the separating clutch is operated electromechanically for quicker reaction times.

The Porsche Cayenne E-Hybrid is available to order now with prices starting around 90,000 euros. Dealers in Germany will first fill their shelves before the end of May with other European markets to follow shortly after. On sale in the U.S. is set not before 2019.

Every car from PSA brand DS to be electrified by 2025