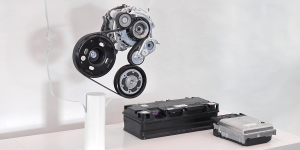 Volkswagen is taking a gentle approach so to speak when it comes to the electrification of the next Golf as the firm presents its latest 48-Volt mild-hybrid, calling it “the first step into the world of efficient electrified models.”

The new system has been presented at the International Vienna Motor Symposium. Technically, Volkswagen will combine the combustion engine with a 48-V belt-integrated starter generator and a 48-V battery.

The 48-V mild hybrid makes it possible to “coast” as in sailing electrically, with the combustion engine completely switched off. This is to save some 0.3 litres of fuel over 100 kilometres but maybe the electric boost upon start-up will be more feasible.

This boost is delivered by a small electric motor, a starter-generator in fact, that serves as alternator and starter. The power of the generator is transferred via a belt and also starts the combustion engine – which is switched off as much as possible while the vehicle is moving, according to VW.

The mild hybrid system’s Li-ion battery holds 48-V and can recuperate and supplies the starter generator.

Dr Frank Welsch, Member of the Board of Management for Volkswagen Passenger Cars with responsibility for Technical Development says: “Our newly developed, cost-effective 48-V mild hybrid will pave the way for introducing this type of technology to the mainstream.” Emphasis here is indeed on mainstream and cost-effective. As a volume manufacturer, Volkswagen struggles to offer electrified models at a lower price point that would yield the desired profits.

In Vienna, VW thus launched a new natural gas engine and has yet to forsake the diesel. Instead, the new 2.0 TDI will be the first Volkswagen diesel engine using a mild hybrid system.