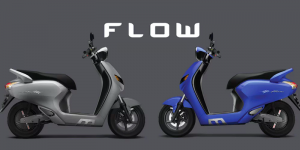 The Indian startup Twenty Two Motors has developed an affordable electric scooter and has now presented it to the public. The networked scooter is called Flow and costs about 1,000 euros.

For the reasonable price, the scooter does come with a few respectable vehicle features: It is driven by an electric motor with a 2.1 kW performance made by Bosch. The top speed is set at 60 km/h.

The scooter can either be selected with either one or two removable battery packets, which provide a range of up to 80 or 160 km, respectively, and can be charged to 70% capacity in an hour. Via KERS (Recuperation) the range can be extended by up to another 6%.

A prototype of the e-scooter was presented in Gurgaon at the company HQ in November 2017. At the time, the company stated that they planned to construct about 50,000 of the scooters during the first year. So far, the company also plans to market the vehicle solely in India. If it will be released for sale in other nations is unclear at this point. The company has recently started their second round of reservations, after the scooter sold out shortly after the initial presentation.