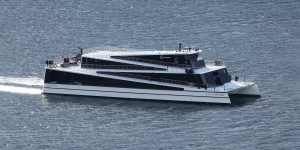 The all-electric catamaran called the Future of Fjords has been launched just as planned. Its carbon fibre hull has space for 400 passengers and the electric ferry will sail between Norway’s UNESCO heritage sites and opportunity charge at sea.

Whilst the fjords of Norway have been declared a cultural heritage by the UNESCO, the electric catamaran appears to be the future of fjords indeed.

With its extra light hull made from carbon fibre, the battery pack of 1,800 kWh delivers enough power for the electric motor. Each of the two propels the electric boat forward with 450 kW. They reach 16 knots (almost 30 kph) during operation for a range of 55 km.

But that is not enough. So for charging the Future of Fjords, Norwegian maker Brødrene Aa (BRAA) came up with a waterborne opportunity charging solution called PowerDock. Says the press release: “This 40m long, 5m wide floating glass fibre dock will sit in the water at Gudvangen, housing a 2.4 MWh battery pack. This charges steadily throughout the day via connection to the local grid network, which does not have the capacity to charge the Future of The Fjords directly. The innovative solution allows the vessel to stably, efficiently and cost effectively ‘refill’ in just 20 minutes.”

Moreover, the dock also stores consumables, fuel for sister vessels, and allows black water to be offloaded for treatment on land so that the Future of The Fjords will not discharge sewage directly into the fjords.

The Future of the Fjords is to run all year long and will do 700 journeys annually, that is two trips a day. Its first route is between Norway’s Flåm and Gudvangen.

And the electric catamaran won’t stay alone there long as indeed the future of the fjords is electric. Norway is planning to create the first zero-emissions zone on water as the parliament in Oslo has accepted a resolution which would see emissions banned in the world heritage fjords “as soon as technically possible and no later than 2026.”