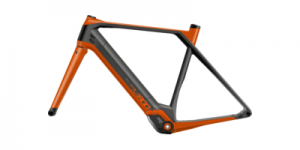 China’s Bafang with offices in Europe hopes to inspire a new trend for electric cycling for road bikes after the eMTB segment has grown significantly in recent years. Therefore its compact crank drive called M800 explicitly aims for the racing bike segment, where weight is everything.

While their electric bicycle motor weighs 2.3 kilos, the battery and control units hidden inside the frame weigh in with almost the same, so that the M800 system as a whole adds a little less than 4.4 kilos to a road bike, or any bike.

The output is rated at 200 W and a max torque of 55 Nm. In its pedelec setting, the M800 is limited to 25 kph in pedal assist. Bafang also offers a 45 kph version that would transform a road bike into a speed pedelec for which scooter regulation apply. Still the latter might make more sense in a segment that is driven by speed.

Bafang is aware of this and says: “Since an e-road bike will very quickly exceed the 25 km/h (EU) legal motor assist speed threshold, the drive has been tuned to perform optimally when starting off and accelerating, as well as on short sprints and steep climbs. For the US and other regions, the speed limit can be set at 32 km/h or 45 km/h instead. But whatever the exact limit, most important is that when the limit is reached, the drive train unit runs almost resistance free. Thus the rider’s own pedaling effort above the limit speed is not affected. This will typically be when riders are pedaling in the upper 20s to mid-30s km/h speed range.”

The pedelec system for road bikes will be on display at the Bafang booth in Shanghai.