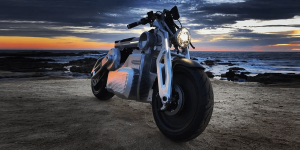 U.S. startup Curtiss Motorcycles’ latest bike immediately garnered attention at a show in California due to its sheer power. It has two electric motors by Zero Motorcycles, which offer a combined output of 127 kW.

The Zeus attempts to redefine the look and design of a motorcycle on the surface, but the truly interesting aspects are happening under the hood, so to speak. In cooperation with Zero Motorcycles, Curtiss has developed what they call the E-twin platform, which consists of two electric motors coupled with a single output shaft, capable of putting out double the power and torque.

Currently the motors working in tandem produce 393 Nm torque as well as 127 kW of power. The motors are powered by a 14.4 kWh battery pack for now, but this is expected to be increased closer to the market launch of the bike, as while the battery is larger than contemporary examples, the high power output of the bike will burn through energy reserves quickly.

Production is set to begin in 2019, before the public market launch happens in 2020. The manufacturers have further plans: “There are several Curtiss models currently in design and development. [Our] long-term product strategy includes models that will fit every genre and pocketbook,” said Jordan Cornille, director of design at Curtiss Motorcycles.