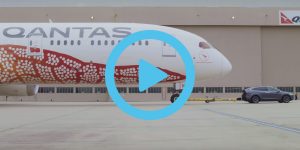 Remember Boeing’s infamous Dreamliner and its burning batteries? Well, its reputation has been repaired and the following clip may elevate the plane into the hall of fame, just because it is in tow of a Tesla Model X.

In fact, it was not even Boeing pulling (pun intended) a publicity stunt but Qantas, Australia’s main airline. They hired a Tesla Model X to help their plane to taxi on an airfield and break the Guinness World Record in the meantime.

Record for what? Well, in fact the Tesla established a new category for the heaviest tow ever accomplished by a series electric passenger vehicle. The Boeing 787-9 Dreamliner was towed on a remote airfield in Melbourne.

The collaboration includes rewards for frequent flyers of Qantas. If they also happen to own a Tesla, they will have their mileage offset both on the road and in the air for the month of June. The airline is also offering Tesla High Power Wall Connectors at Qantas Valet facilities in Sydney, Melbourne, Brisbane and Adelaide.

It is not the first time Qantas and Tesla have been working together. The airline also commissioned a drag race in 2016 in which the Model S was in the lead at least until the aircraft took off.