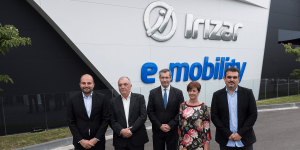 The new factory has a capacity to make 1,000 electric vehicles a year to start with so the plant is churning out one electric bus every two days at the moment. However, said production is to double from September due to full order books, says Irizar.

The Spanish company has invested 75 million euros into what it calls its e-mobility plant and focussed on sustainability. It uses excess heat from another factory in the area for hot water for example and is rated class A in energy efficiency.

For now, they employ 150 workers but aim to create 300 to 500 jobs within the next 5 years. Testing is done on the premises on dedicated test benches.

Apart from electric buses and components, Irizar also wants to build other electric commercial vehicles in Aduna. Those are to “complement the electromobility needs of cities,” according to Irizar.

Madrid is among those urban areas that already utilise electric buses made in Spain reportedly. Furthermore, Irizar has recently entered a cooperation with Ferrostaal to sell and deliver electric vehicles across the DACH region.