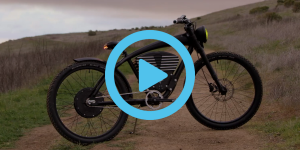 In the U.S. retro-style electric bikes are in season every summer and it is the same with this beach cruiser from California. Vintage Electric presents the Scrambler S, a strong electric bike able to go as fast as 58 kph – mostly illegally so.

So in order to comply with e-bike regulation in most states, Vintage Electric regularly limits the motor output to a tamer 20 mph or 32 kph. The latter is still faster than pedelecs are allowed to go in Europe ever but almost a standard in the USA and a nice cruising speed. Pedalling is not a must though.

Inspiration for the Scrambler S came from light motorbikes that were used during the times of WWII. Whilst that choice may appear odd in the old world, in America such references are not unheard of. For example, Texan Alternet Systems, a battery technology company recently launched its own electric motorcycle brand, ReVolt Electric Motorbikes. Their first model will electrify the Chinese replica of the BMW R71 sidecar motorcycle from 1938 reportedly.

Being foremost a bike more so than a motorcycle, the Scrambler S looks lighter though. The battery in a tank-like case is the most striking nod to old motorcycles and holds no less than 1,123 Wh, enough to power the Scrambler S for up to 120 km at 32 kph. On top, there is the high speed but that “is only accessed if the customer purchases the ‘race key’ which clearly states that it is for private land use only,” the company told us. Power is delivered by a massive rear hub motor that underlines the laid back sitting position. There is a leather seat for the rider but no option to take a passenger along.

The design piece does not come cheap though as Vintage Electric has put the price point at 7,000 dollars – clearly not an everyday choice. In any case, e-bikes such as this classify as light motorcycles in Europe, requiring extensive certification, helmets etc. Vintage Electrive assured us in an email though that the Scrambler S e-bike can be shipped anywhere in a version adapted to any regulation.

++ This article has been updated to include the company’s information that the e-bike can be adapted to any existing regulation. ++