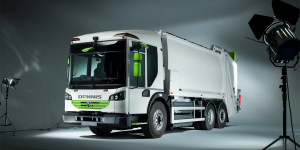 British Terberg RosRoca presents their all-electric dump truck at the IFAT in Munich. Their eCollect features a 200 kW electric motor powered by a 300 kWh battery. Production is to start by the end of 2019 with models for both right and left hand drive.

Electric garbage collection is becoming a trend – citizens say thanks. BYD just received an order from Shenzhen over 500 such electric dump trucks and Volvo is to launch their electric waste collector in Gothenburg reportedly.

Now Britain’s Terberg RosRoca has put its own model on show and promotes the eCollect as being a fully integrated product, that is low-entry chassis, refuse compaction body, bin lift and telematics system with specifically designed battery packs and control systems. The latter are coming from OEMs.

Says Tim Conlon, Group Commercial Director at Terberg RosRoca: ” The eCollect is the culmination of years of extensive research, development and joint efforts from our subsidiaries and is the first fully integrated OEM produced EV RCV. Integrated because uniquely, we are a manufacturer of low entry chassis, refuse compaction bodies and bin lifting systems.”

Production is scheduled to commence by the end of 2019. The eCollect electric waste truck is currently undergoing extensive trials and technical verifications. This includes the battery management software that is to be geared to the needs of garbage collection with electric trucks in cities.