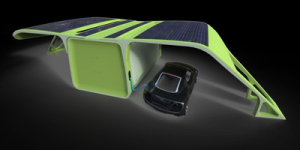 The Israeli company Chakratec has developed a energy storage technology for ultra fast charging stations, which is powered by kinetic batteries using a flywheel. They also recently completed a round of financing worth 4.4 million dollars.

What the flywheel principle means, is explained by co-founder Ilan Ben-David, using a somewhat humorous comparison: a toilet cistern. “The charging process developed by Chakratec can be compared to the flushing of water in a toilet tank – when a strong flow is needed, a lever is pressed and the tank empties rapidly and then fills up again. Similarly, when a vehicle enters a charging station, the kinetic battery empties, rapidly transferring the energy to the vehicle, and then fills up again. Chemical batteries cannot be used for this application due to the number of cycles and high power required”

Investors seem convinced by the concept, as the company managed to secure 4.4 million dollars in their third round of financing so far. The Israeli iArgento Group and the company Goldbell from Singapore are among the chief investors. The largest investor remains Capital Nature, who joined with an investment of 3.2 million dollars.