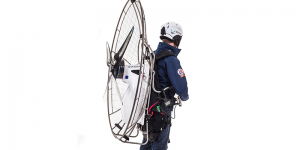 French EXOMO has teamed up with Aero Composites Saintonge (which made the E-Fan demonstrator for Airbus) to electrify a so-called paramotor. Their 15 kW electric motor drives large propellor that the pilot carries on his back to power a paraglider.

Exomo’s innovation means motorised paragliding has just become silent again. Their design is a joint one by French paramotor school Aeronature and aeronautics specialist Aero Composites Saintonge. The latter also made the E-Fan demonstrator for Airbus.

As Exomo, they now introduced the Integral, a so-called paramotor that includes a battery pack and is designed to fit on any paramotor frame. The battery is said to last for an hour in cruise flight.