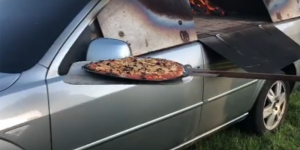 Forget about gas guzzlers in the common sense. Artist Benedetto Bufalino has found a way hotter use. He converted an old Ford Mondeo into a fully functional pizza oven – all wood fired and stone baked of course.

Benedetto Bufalino is a French artist who plays with everyday objects by altering their original function. He has already turned a sedan into a jacuzzi and also reused a police car as a chicken coop.

His latest coup is his take on a gas guzzler, a Ford Mondeo in this case. He retrofitted the ICE with a fully-functional pizza oven heated with wood and nothing else.

Bufalino had to construct an inner layer of bricks after removing the car’s interior to sustain the high heat needed to bake a pizza properly. The Ford Mondeo now burns nothing but wood and exhaust only deliciousness.

Mercedes hires beatboxer to make some noise for EVs