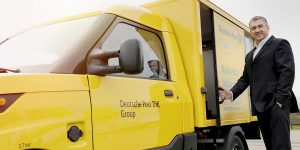 DP/DHL fired Jürgen Gerdes, who had been responsible for StreetScooters significant success over the last years. The board member and manager had worked for the German Post since he was 20 but has to retire from all positions with immediate effect.

Manager Magazin reported the news first and claims that Gerdes is paying for sins he committed when he was leading DP/DHL’s letter and packages businesses. Rather than the projected 1.6 billion euros, the division will only turn over 600 million euros this year – a disastrous result indeed.

Jürgen Gerdes had worked for Deutsche Post since he was 20 years old. DP/DHL had appointed him to lead their push for electric mobility just recently. Back then in April they claimed “his proven experience in advancing agile developments and successful market rollout of new customer oriented services and solutions” as reason for their decision to led him lead on the StreetScooter expansion.

A successor has yet to be named.