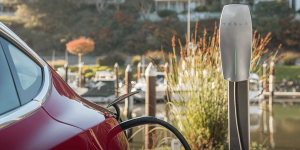 Football fans travelling to the World Cup in Moscow in a Tesla car may now go all the way thanks to an initiative of Russian Tesla (and football) fans. They set up two charging stations at hotels along the route through Eastern Europe.

While the Russian EV charging network is still woefully underdeveloped, the Moscow Tesla club has gotten together to enable range-angst-free travel towards the East. In an email, they described their effort as follows:

“The first charger is located in Vyazma (230 km / 143 miles from Moscow), and the second one in Smolensk (400 km / 248 miles). Next charge may be performed in Belarus with a wide net of chargers located there.”

Their initiative resembles a similar one at the other end of the world. In Australia, Tesla owners had taken it unto themselves as well to set up a charging corridor with more remote locations in mind. The Round Australia Electric Highway spans about 17,000km. Charging outlets are on average 200 kilometres apart and never more than 400 km (we reported).

While Tesla has recently reached the milestone of having installed 10,000 Superchargers worldwide, some areas remain underdeveloped when it comes to electric car charging infrastructure.

Build your own EV kits for kids