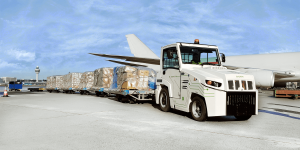 Goldhofer and Suncar debuted an all-electric baggage tow tractor last October and have since been testing their technology at four airports in Europe. The Sherpa E prove a success with its extended towing and fast-charging capability.

Goldhofer Group is a provider of cargo solutions. For their electric baggage and cargo tow truck they teamed up with Suncar HK. Since launching the EV last autumn, they have hooked on to electrification projects at airports such as Frankfurt’s E-Port An.

The Sherpa E builds on Goldhofer’s existing Sherpa and adds a lithium-ion battery. It allows fast charging in just an hour and comes with on-board charging technology (22 or 44 kW). Moreover, with a maximum towing capacity of up to 80 t, it can tow both baggage but also cargo at an efficient speed.

The tow tractor forms a running showcase for Goldhofer’s and Suncar’s joint ‘IonMaster’ technology, which will the use in other electric vehicle projects under development as well.