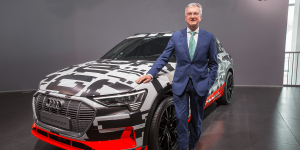 Audi has cancelled the premiere of its first electric car, the e-tron quattro set on August 30 and 31 in Brussels, claiming “organisational issues” which are namely Rupert Stadler, Audi’s CEO who had been arrested last week. The delay will not affect the on sale date though according to our sources.

Reports first came in through the Financial Times that cited Audi cancelling the e-tron premiere due to said “organisational issues”. The initial debut was to take place at the Audi factory in Brussels tasked with starting producing their first electric car.

While the FT had not had a new date for a delayed launch, our North American colleagues at Electrek received an invitation for an Audi event to take place in San Francisco on September, 17, so it looks like the cancellation is in fact just a delay. It is unconfirmed though that the new date is the e-tron debut.

It would make sense though. After all, Audi is positioning their electric SUV to “fight” Tesla in its own segment and where to better do that than on their home turf. And another attempt at positioning may come into play – since Rupert Stadler has been arrested in Germany, interim Audi CEO Abraham Schot has been trying to make an impression and might use the presentation of Audi’s first EV to catch some of the limelight for himself.

And there is another reason why Audi may have chosen the States as new location for their presentation: homologation. If certification in Europe is not completed before the summit, Audi would have a tough standing in front of journalists, especially now that they are looking particularly hard following the diesel-scandal.

In any case though, the delay of the debut is not crucial as it will not affect the actual market launch, according to information obtained by electrive.net.

Update 25.06.18: The postponed premiere of the Audi e-tron will take place in mid September in San Francisco, confirmed by head of production Peter Kössler at a press conference in the Hungarian Györ. Until now, there had only been rumors concerning a launch on the 17th of September.