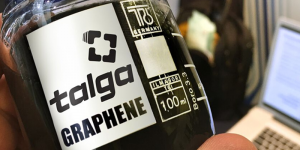 Talga Resources from Australia say they managed to mix enough graphene into concrete to make it conducive, meaning it could build roads able to charge an electric car while driving. Their concept is not entirely new but their foray into global markets is.

Talga Resources has been working on their conducive concrete for some time and already use it in underfloor heating and lightning protection. The idea to wirelessly charge electric cars in motion is new to them though and has been developed at their graphene-graphite R&D laboratory in the UK.

In a first step, Talga sees an emerging application in solid-state heated roads for an environmentally friendly way of clearing ice and snow from key transport routes and airports. But the potential for dynamic and wireless charging of electric vehicles is still in the future for them.

Not so for Magment. The German startup developed their magnetised cement for no other purpose than to dynamically charge EVs. Their concrete is mixed with ferrite particles from recycled electronic waste and Magment say their patented material allows energy to flow into a coil to then inductively charge electric vehicles. Their Magment can be based on asphalt or cement and the young firm is currently working on projects in Finland, Germany and China, with partners from both government and business.

In the case of Talga however, they use graphene and say conductivity is achieved with very low graphene loading, so that a larger proportion of ore processing by-products can be used. They have yet to see their solution being incorporated into a road.

In Europe, on road or dynamic charging is making progress although mostly by more mechanical means. Both the eRoadArlanda in Sweden and the eHighway by Siemens hook onto an electric vehicle to charge it while driving but how much neater could conducive concrete be one day?!