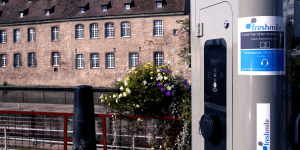 Berlin startup PlugSurfing now includes the 2,000 charging points of Freshmile in France and Germany in their portfolio. The cooperation stretches over 100 local networks and will enable electric car drivers to use their PlugSurfing RFID key widely.

The cooperation of PlugSurfing and Freshmile has taken immediate effect. It expands the network included in the PlugSurfing app by another 2,000 charging points in both France and Germany so that it now includes over 70 000 charge points in 31 countries in Europe.

Customers may pay FreshMile via RFID key for now before the payment options will be enabled in the PlugSurfing app as well later this year. In 2017, PlugSurfing introduced Scan&Charge, offering EV charging without registration via a QR code on the charging station and a mobile website backing it up.

Freshmile of France uses the Open Charge Point Interface (OCPI), a standard for interoperabilty, at a national scale.

PlugSurfing started as a small business in Berlin in 2012 before it was taken over by Finland’s Fortum earlier this year (we reported).