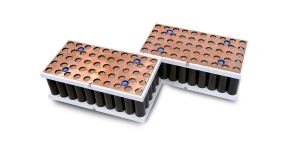 Ecovolta of Switzerland is in the midst of construction of a fully automated factory to make 200 MWh worth of Li-ion batteries in the country. When manufacturing starts this September, this will be one of the largest operations of its kind in Europe.

The company is a subsidiary of Swiss ecocoach, an automation specialists responsible for setting up the production. Ecovolta say their battery packs are made for handling high current without the need for any active cooling.

Alongside the new battery production in Schwyz, Ecovolta also establishes a research and development centre together with firms from Italy and Switzerland.

“They test battery systems and build full drive prototypes, including power electronics, right next to the production facility. The motor test bench can then be used to measure torque, load curves and power peaks,” says Paul Hauser, CTO at ecovolta.

Moreover, the R&D department also includes a battery lab and the in-house test bunker makes it possible to carry out “ultra-secure tests when necessary,” says the company.

Ecovolta’s production facility and the research and development department take up a total area of around 7,500 m2.

The design principle used by ecovolta enables flexible mass production of square and round battery types in a fully automated process. At voltage levels of 12–600 volts, capacities from 10 Wh to several hundred kWh can be achieved, while the energy density reaches 480 Wh per liter. In combination with ecovolta’s battery management system (BMS), the batteries can discharge at a rate of 8C and charge at 2C without any need for cooling.

Ecovolta says battery systems manufactured by them are already being used in e-mobility applications and in agriculture. However, as the power packs do not require active cooling they can most likely be found in small electric vehicles or stationery energy storage applications rather than full-blown electric cars.